As I just get off Whatsapp after talking to VG, I couldn’t stop mentioning it to a friend that this guy is Gold. Platinum. Titanium (now, I am not that good with metals, all I mean is, he is the best). Before I lose this intense passion, I thought I will just document it. Let this be one of the first testimonials on him that the internet has because when the world starts knowing Vikas, they should know how far his awesomeness dates back to.

When I joined SquadRun back in 2015, I was no more different than I am right now. And VG couldn’t be any more different than he is right now. And both of us couldn’t be any more different than each other than two people can ever be. This might not make sense, but it doesn’t have to. Feel it. Despite having these starkly different personality types, we clicked. He was the CTO of SquadRun, ever so serious. And I would pick him up (literally) and dance around with him (something that not a lot of people can boast of doing). But this is not about how well we clicked. This is about how Vikas goes on about his life solving hard problems every day, like a boss (please notice pun). 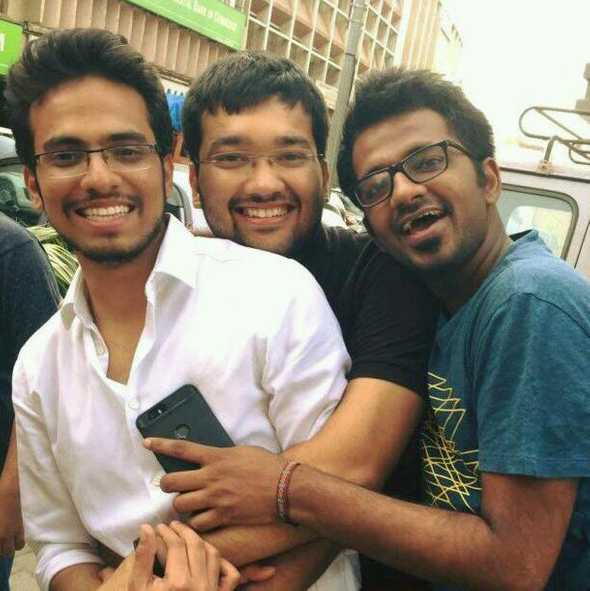 (L-R) Vikas, I and Shubham (another guy I love)

Vikas is empathetic and in all his dealings with people, he will always be fair. I have had my fair share of sad moments in life. And when they happened, VG would simply ask me to take a break if I was unable to focus. Once I made a sudden plan for a trip (before you judge me, Coldplay was in the country and I got free passes), VG happened to take one day to tell me it was fine for me to go away for 3-4 days. He paid the amount by which the flight price increased from the previous day, even though he really didn’t have to.

He is the type of guy who will let you take the love for something he helped you build that worked well, and _share_ the heat for things that didn’t work well (I know, I know that’s what great leaders do. But that’s the whole point! He is great!). Those times you did a mistake, sometimes major ones, you could see that he is not happy. And you would feel bad about it and despair that how are we going to fix it. And then the moment passes, and VG smiles at you and tells you it is okay, and that he thinks you can fix it. Your despair is gone, you scramble away to fix things, promising yourself you will never repeat the same mistake again. The understanding that mistakes happen, what is more important is that you learn from it and strive to not do it again, made sure we never had a terrible day at work.

As Squad grew, he magically started to handle all the new problems that come with people scale and in product development, in addition to what he was doing already. In true CTO style, he can break open-ended, large problems into smaller ones. He was involved in building hiring processes, managing product development, learning how to run a startup, learning how to make sure your engineers are happy and growing. He always knew the right thing to do. All this, and you will never see him go out and about beating his chest for something he did that solved a huge pain (I can’t say that about myself!).

If VG was in cricket, Rahul Dravid would have just been called the fence or something. Because VG is the wall. ~ Ketan Bhatt, giver of bad analogies

He doesn’t break. He is been at it for ~3 years. Constantly taking on new challenges, preparing/learning for them, anticipating some of them before they even come, constantly growing and constantly inspiring. 24*7. I haven’t met anyone who is so open to being a better version of himself every day. He is constantly experimenting. With routines, processes, books, food. What not!

And now, after I have left SquadRun, leaving the team with a bandwidth crunch, VG has again risen up to the occasion and is handling all the extra pressure with a smile. Even then, when I asked him to take a look at one of the companies I was interviewing with, he took out time to read up about the company and share what he felt. And that’s when I realised again, he is Gold.

I will just stop here because I am feeling better now. You praise us a lot for a small bug we could fix quickly, or a design we could think in and out of. But you need to be praised properly too. You have changed a lot of lives. Keep at it.

I know this reads like a fan-mail. Aha, good observation skills lovely reader. It is! I am a fan Vikas ❤️ and I know at least 10 more people who feel the same.